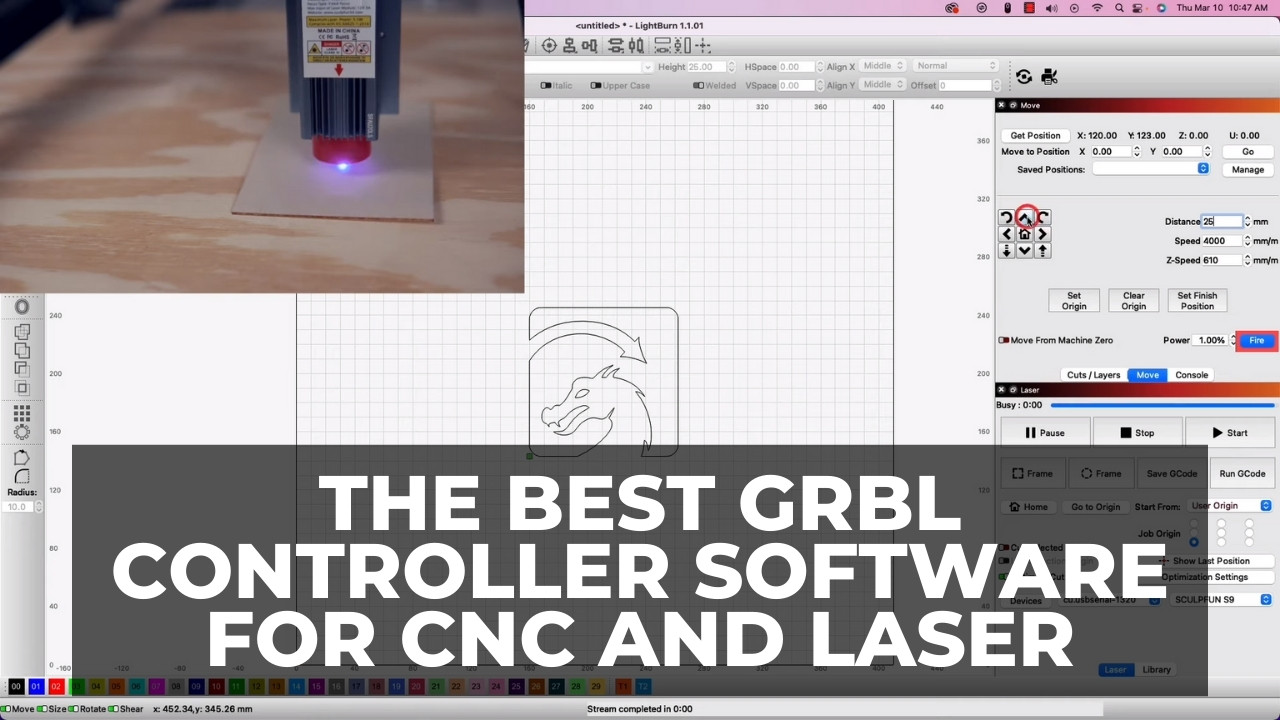 Nowadays, there are more GRBL software options than there are GRBL settings! With so many to choose between, it can be difficult to pick the best GRBL software for your next CNC project.

However, what sets the best GRBL software apart are their unique features – which we’ll explain in detail in this article.

Cncjs has the best networking abilities among all GRBL controller software. It’s the best option to install on Raspberry Pi, or when you add a touchscreen to your CNC.

OpenBuilds Control has a neat interface and can jog your machine from your phone.

LightBurn is the best GRBL software for lasers since it integrates excellent designing abilities. LightBurn is a standalone laser software, however, it’s not free.

LaserGRBL is the best GRBL software with laser-specific abilities such as controlling image contrast. LaserGRBL is outstanding for engraving images, however, it doesn’t offer design features.

UGS has separate jog settings for the Z axis.

It is easy to set up GRBL with UGS.

UGS is compatible with Windows, macOS, and Linux.

UGS is not the best option for Raspberry Pi (though UGS is compatible with it).

The Universal G Code Sender (UGS) is one of the best GRBL software for many reasons. It’s robust, and it has all the basic widgets you need to interact with GRBL – but UGS also has some other unique and useful features.

UGS has different distance increments for jogging the Z axis. I’ve only seen this feature in UGS and consider it highly helpful for my projects.

Jogging is when you manually move your CNC machine by pressing a button (on the keyboard or a joystick, etc). However, GRBL is not the best for jogging – with serious shortcomings.

Some controllers jog in real time, and stop moving the CNC machine as soon as you tell them to stop (or if you stop sending them signals to move).

However, GRBL doesn’t listen to your jogging commands in real-time – GRBL only moves in increments, and you can’t stop it mid-travel.

Let’s assume that you’ve set your control software so that GRBL moves the CNC 50mm (about 2”) every time you press the jogging button. When you press the button, GRBL stops listening to any other command until it has covered the distance.

So, if you press the button by mistake, or realize that the machine is crashing into an obstacle, you can’t stop GRBL during the jog.

The control software has jog settings that specify how much GRBL moves your machine with each button press. But, UGS has one setting for the X and Y axes – and another for the Z axis.

This feature is useful since we move the Z axis at short distances. If we tell the Z axis to move in large steps like the Y axis, it risks jamming into the board, and can damage your stepper motor or its driver.

Therefore, you should use small settings in other GRBL software to stay safe. However, this requires compensating by pressing many times when jogging the X and Y axis.

Another cool feature is you can jog your CNC machine using a joystick or a gamepad with UGS.

UGS is open-source and free control software. It has always been robust and reliable in working with GRBL, never running into issues or bugs. UGS is compatible with Windows, macOS, Linux, and Linux ARM. You can download it here.

UGS is incredibly easy to install. It has no external dependencies (for example, external browsers or runtime libraries).

Setting up GRBL is also pretty easy with UGS – it has a list of GRBL settings along with what they do. You can also import your GRBL settings from a file.

Cncjs can run on Raspberry Pi bug-free offering a touchscreen.

Cncjs has convenient buttons to override feeds and speeds.

Jogging has the same number of steps on all axes (unlike UGS).

Cncjs is the best GRBL software if your CNC machine has a Raspberry Pi.

Though, if your CNC doesn’t have Raspberry Pi, cncjs is still one of the best GRBL software, competing closely with UGS.

You can also add a touchscreen if you prefer, and control the CNC machine on sight without connecting a computer.

You need a browser to run cncjs, but it doesn’t require an internet connection. It just uses the browser’s network protocols to run, since your GRBL is on a serial port.

Cncjs has many widgets. It has a visualizer that reads g code commands and simulates the toolpath. But, if the software runs slow you can turn it off.

Cncjs is compatible with making useful macros such as corner probing, hole probing, semi-automatic tool change, and more. Formulating a macro to locate the Z axis at a specific height is quite helpful. You can adjust the Z-penetration from the same height in every toolpath, and this macro brings the tool to that specific height every time you run it.

Cncjs is the best software for controlling GRBL with a Raspberry Pi, and works smoothly and reliably – you won’t scratch your head trying to solve issues and bugs with cncjs.

Cncjs has amazing networking abilities – you can control the same serial port using several browsers. That means you can open cncjs in distinct browser pages and control your GRBL with them separately.

But cncjs doesn’t stop there. You can do this networking with different devices, too. For example, you can connect your CNC machine with a Raspberry Pi and your phone at the same time over a WIFI network.

So, you can go to your CNC machine, start an operation, and still send commands with a laptop or a phone over a wireless connection.

Cncjs also supports a webcam. So, you can add a webcam to your CNC machine and watch the workpiece and progress in your browser!

OpenBuilds Control has spoil board surfacing.

Jogging with your phone is possible with OpenBuilds Control.

OpenBuilds Control has instructions for steps/mm.

It is only compatible with GRBL (unlike cncjs and UGS).

It uses the same number of steps for jogging all axes (as opposed to UGS).

It is not compatible with Raspberry Pi.

You can jog your CNC machine from your cell phone with OpenBuilds control. This only requires a local WiFi network.

You can connect your cell phone to the computer running OpenBuilds control over a WiFi network. Then, open your phone’s web browser and connect to your CNC machine over your local network.

This is arguably the best GRBL jogging method.

I keep my laptop far away from my CNC router, due to the machine generating so much dust and debris. So, jogging the CNC from a cell phone that I can carry around while inspecting the workpiece is ideal. Plus, you don’t then rely on gamepads for jogging either.

OpenBuilds Control has spoil board surfacing. The spoil board is a sheet (usually an MDF sheet) that lies beneath your workpiece.

Since the CNC bit bites into the spoil board when cutting, the spoil board will get marked and scratched over time. So you’ll have to surface it occasionally, which means scraping off a little bit of its surface.

You can create the toolpath in CAM software, but OpenBuilds Control also has spoil board surfacing. So you can directly surface from the control software without opening your CAM. However, OpenBuilds control doesn’t provide other CAM abilities.

OpenBuilds Control has a clean and straightforward interface. It includes all the common useful widgets, though some widgets stand out:

You can override laser speed during operation.

LaserGRBL is only compatible with Windows.

Laser GRBL is only compatible with lasers that have GRBL controllers.

LaserGRBL is the best free GRBL software for laser cutters and engravers. However, it doesn’t have any design features: for example, you can’t draw shapes for cutting inside the program. So, LaserGRBL is an ideal option for engraving pictures from raster files.

It’s well-supported and frequently updated – impressively so for a free product and an open-source team.

One of LaserGRBL’s cool features is that you can override your pre-set laser speed during a job.

This is handy because you often get different results by changing laser power output and speed. With LaserGRBL, you can change the speed if you notice your engraving isn’t clear enough, for example.

Another useful feature is LaserGRBL’s automatic cooling support. Glass tube CO2 lasers (like Glowforge) get hot pretty fast. It is imperative that these lasers cool of when they overheat.

LaserGRBL supports automatic cooling. With this feature, the controller stops the operation until the laser is well below dangerous temperatures.

Finally, since GRBL is also a CNC controller, it supports g2 and g3 g codes. In contrast, LightBurn doesn’t support g2 and g3.

LightBurn is compatible with many laser controllers (other than GRBL).

LightBurn is the standard software for most laser users.

LightBurn is not free GRBL software – it costs around $60 for a license. Since GRBL is open-source and has free firmware, paying for control software can seem unnecessary, especially since there are tons of free GRBL controller software out there.

But, this makes it very advanced, easier to use, regularly updated, and well-supported – so you can expect more features and better compatibility in the future.

Our license cost around $40 a year back (I may be misremembering slightly), but now it costs around $60. But, this comes with a year of updates, and you can still use it after the year – you just don’t get the latest updates and features.

For example, while LaserGRBL is excellent for engraving images, you’ll have to create the design in external CAD if you want to cut a circle. Then, either rasterize it or generate the g code in CAM software, before importing the raster file or the g code file into LaserGRBL.

However, you can create your design and run your laser right inside LightBurn. LightBurn has rich design features, so you can create shapes and contours for cutting. Lightburn also supports DXF files.

LightBurn doesn’t just support GRBL; it also supports other controllers including Ruida, Marlin, Trocen, etc. Therefore, LightBurn is compatible with many lasers, while GRBL software such as LaserGRBL is only compatible with a few lasers.

On the downside, LightBurn lacks some features that are specific to GRBL only. For example, you can’t flash GRBL with LightBurn. It also doesn’t support automatic cooling.

How to Choose the Best GRBL Controller Software

There are tons of GRBL software. But we have introduced the best GRBL controller software here.

The first question is whether you want the GRBL software for a CNC or a laser machine:

Final Thoughts on GRBL Controller Software For CNCs and Lasers

For standard CNC work, we recommend UGS, cncjs, and OpenBuilds Control as the best GRBL software.

Cncjs is the best GRBL software if you need network abilities and compatibility with Raspberry Pi. You can add a touchscreen to your CNC or connect to your CNC with multiple devices using cncjs.

You can jog your CNC using your phone with OpenBuilds Control. It’s also robust and has a clean interface.

LightBurn is the best GRBL software for lasers. LightBurn isn’t free, however, it integrates great design abilities and most laser controllers.

LaserGRBL is the best free GRBL software for lasers. It’s great for engraving, however, it doesn’t support DXF files or designing inside the program.