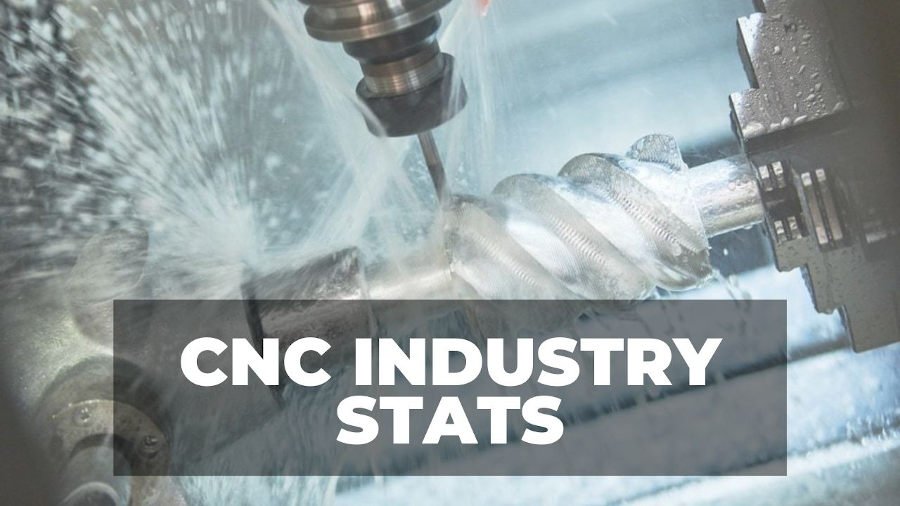 Humans have always been an industrious species, and so we have always sought efficiency and automation when developing our various endeavors. Abaci became calculators, looms became sewing machines, and assembly lines are now more machine than man.

In the same way, CNC machining has brought to us a new way to automate the carving, drilling, and shaping of materials by programming specific parameters into a machine and letting it do all the heavy lifting for us.

From making signs and furniture to tools and car parts, the specificity and detail to which these machines can cut materials like wood and metal were once only achievable by those with legendarily skilled hands.

Given this, it’s easy to imagine how the mass-production and use of CNC machines have been a major boom for a lot of industries, and here we’re going to look at how the CNC industry itself has been impacted by this widespread – and growing – use.

Key Facts about the CNC Industry

Recent News in the CNC Industry: Past, Present, and Future

Publicly available software for CNC machining was introduced for Linux in 1989, though that doesn’t mean they were an immediate fixture in workshops and factories across the country. Major steps were taken in the year 2000 during the transition of this software as open-source and in the public domain.

Since 2014, the purchase and use of different kinds of CNC machines, from CNC lathes to laser cutters, have seen continuous annual growth.

While this is expected to dip slightly in 2022 – likely as fewer people need to spend as much pandemic-necessitated time at home – the industry is still on its way to outdo itself by 2023 and continue to grow as both industrial and personal uses are further researched and refined. The industry is expected to grow at over 4% per year from 2017 to 2025.

The expected growth of this market has put pressure on companies that make and sell CNC machines, as it means the field is due to get more competitive as it becomes more profitable. This is good news for the consumer, as cutting-edge technology becomes the main focus of R&D departments all over the world.

Why is CNC Machining So Popular?

As well as providing a way to create intricate designs and furniture without needing to take a course in advanced carpentry, CNC machining has shown itself to be extremely beneficial for many industries all over the world.

The clearer benefits include saving both time and money, as well as the significantly lowered risk of human error. While initial designs generally need to be manually created and programmed in CAD software, these designs – once perfected – can simply be copied and replicated over and over.

The CNC Industry and Medicine

Due to the often complex nature of medical procedures, everything from simple examinations to complicated surgeries requires tools of the utmost precision. Any medical professional will tell you that a centimeter in the wrong direction can cause serious issues down the road in things like sutures, incisions, and implants.

Medical fields have found CNC machining to be a reliable and cheap way to make precise tools like surgical scissors, forceps, catheters, and a host of other tools that need to be made to exact specifications to function predictably.

Like medicine, aeronautical engineering needs very specifically calculated measurements for tools and parts to ensure the safest possible conditions. Innovations in the aeronautical travel industries are in development all the time, and these innovations require strenuous testing and development to be ready for something with as much potential for danger as air travel.

Because CNC machining largely removes the need for the manual engineering of individual pieces, new parts can undergo what’s called rapid prototyping, which is effectively the fast and cost-effective production and testing of said parts before making tweaks to the design in the event of undesirable results.

This process is repeated until the tests produce a part that outdoes minimum functionality standards, and proves itself to be a viable part for use in the actual construction of an aircraft. While this kind of extensive prototyping has always been a part of the aviation and even aerospace industries, CNC machining provides an extremely quick, cheap, and far more reliable method when compared to manmade parts.

The CNC industry was worth 81.95 billion USD in 2020, with approximately 40% of the industry used by automotive companies. This figure, alongside the expected growth over the next few years, means a lot of engineering companies and industries are wanting in on this technological boom.

With a projected market value of 128.41 billion USD by 2028, it’s no surprise that the CNC industry is a highly competitive field that has attracted attention and investments worldwide.

The US CNC Industry

Industrially, CNC machining in the United States is focused on aerospace and automotive engineering. The market for CNC machines was estimated to be worth $23bn back in 2015, and is predicted to reach a $4bn market size by 2030, growing at a CAGR of 4.9% between 2021-2030.

44.83 billion USD (roughly 54%) of the CNC industry’s market value is localized in the Asia Pacific region. Technological giants have a close grip on the market for automotive engineering and medicine.

Due to the tight hold on the electronics market thanks to companies like Sony, the semiconductor market has seen significant use for CNC machining in Asia-based industries as well.

The Make in India Initiative of 2014 saw a nationally introspective focus on manufacturing within India to aid in economic growth and stability. This initiative provided industries with the resources to rely less on importation and more on locally-made products.

CNC machines make up around 89% of the machine tool industry in India, and the CNC industry itself is worth 1.8 billion USD. This is mostly due to their rapidly growing automation market, which has seen a steady upturn since 2017, and is expected to reach 4.43 billion USD by the year 2023.

Holding around 21.5 billion USD of the CNC market, 35% of which is localized in Germany, Europe focusses mainly on using CNC machining for vehicles and factory automation. Germany’s lead in this comes mainly from government initiatives for companies and students to focus on machining research and development.

The idea of improving assembly lines with precisely made and programmed machines and parts goes hand in hand with Europe’s already impressive research and development of engineering and AI technology. This effectively improves the connectivity and synchronization between computers and other machines to automate many manufacturing processes.

How Has Covid-19 Affected the CNC Industry?

Like any industry, CNC machining can be drastically affected by outside variables on both local and global scales. Recent years have seen many new events and regulations that have impacted CNC manufacturing in often unforeseen ways.

Covid-19 saw the world turned upside down in a matter of months, and the CNC industry and its various sectors have been impacted just like many others.

While the easing of restrictions has seen the return of air travel’s popularity and profitability, the impact is still being felt across the globe. The reduced need for newer parts saw a reduced rise in value in 2020 and 2021.

It’s not all bad news, however. The increased need for people to work from home and avoid crowded workspaces did see a rise in companies investing in automation tools. Companies sought to streamline their manufacturing processes in ways that could be designed and programmed remotely, for which CNC machining is essentially built.

To combat potential devastating downturns due to Covid-19, CNC manufacturers looked for new and more innovative ways to use their technology to fight the economic decline. Personal-use CNC machines have seen success due to people needing to stay at home and take up new hobbies, and industrial-grade machines have been sold as a way to keep assembly lines efficiently productive in times of social distancing.

Global manufacturing product specialist Lincoln Electric has one of the biggest market leads in CNC manufacturing, at least since they acquired Applied Robotics’ line back in 2011. This is in no small part due to their century-long experience in researching and developing products designed to create and transform.

Their range spans just about everything from simple CNC machines to high-power plasma cutters for heavy industrial use.

Japan-based robotics company Fanuc has been in the CNC and automation industries since the 1950s, and holds a firm grip on the CNC market in 109 countries across the globe.

They attribute their success to their machines’ precision and speed, and pride themselves on their reliable and fast customer service, aiding both companies and individuals with the purchase, upkeep, and use of their machines.

Haas automation is a Californian company that mainly makes CNC machines and other automated manufacturing tools for industrial use.

A lead player in the production of CNC machines, Haas is one of the foremost CNC market contributors in the western world as of 2021, with a projected growth of over 5% within the next three years.

I'm Scott, a professional writer currently living in Edinburgh. As a kid, my dad taught me a lot about woodworking and cutting plastics. As I grew, so did my interest in what I'd later learn was called 'subtractive manufacturing,' which I'm lucky enough to write about extensively along with 3D printing. CNC machining is a relatively recent passion of mine, and one I enjoy learning about every day