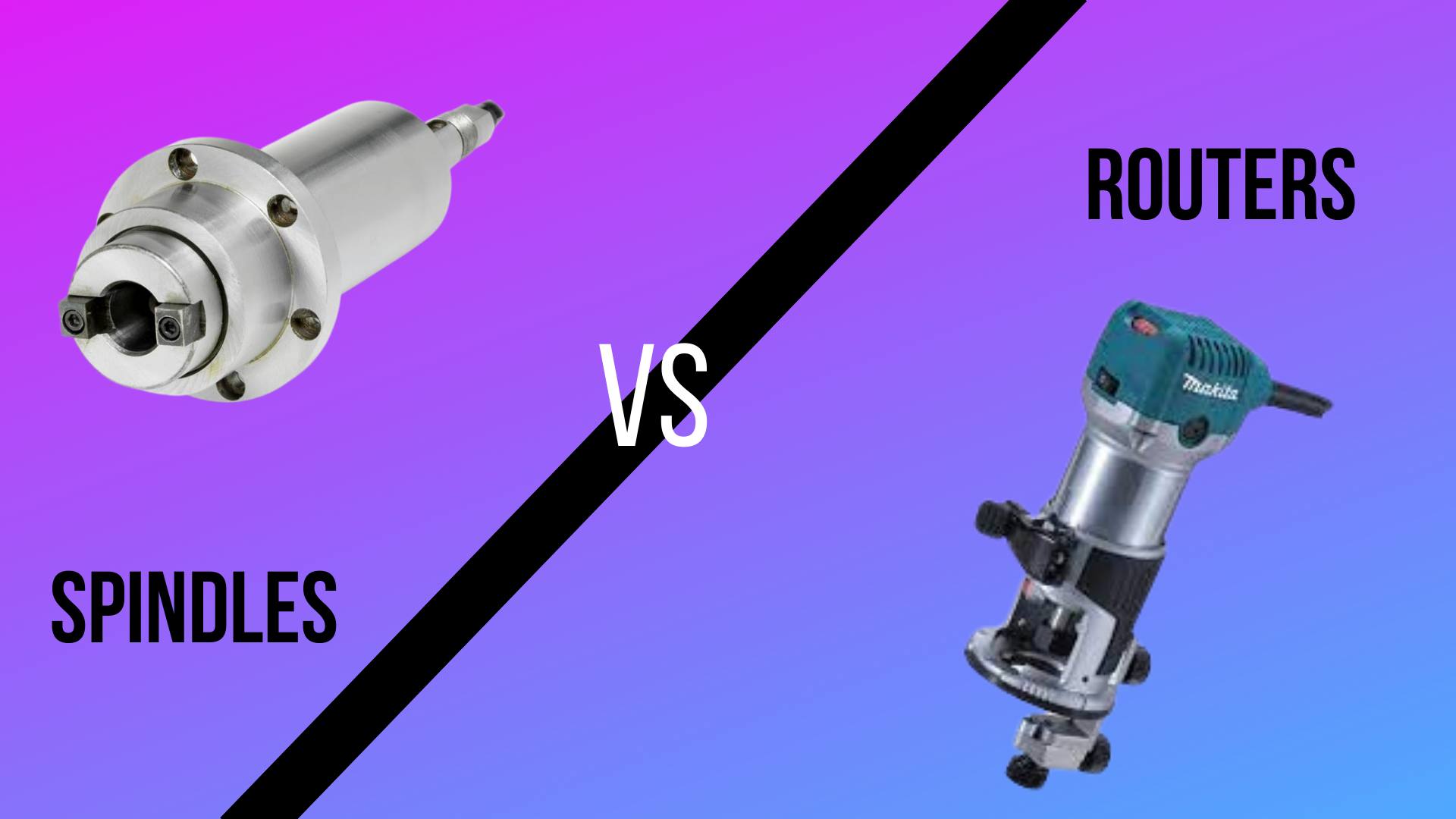 Light bulbs are great for lighting a room, but if you don’t have electricity, a lantern works just fine. This is similar to the spindle vs router dilemma in CNC.

Just like lanterns don’t have a complicated power system, a router is best suited for a simpler CNC router that doesn’t work for long hours.

So, how different are routers and spindles? Is a spindle just a more robust version of a router or is it totally different?

What Is the Difference Between a CNC Spindle and a Router?

The spindle is the part that holds the tool and cuts the material.

A handheld router is a woodworking tool that can also hold a bit. While a drill can only pierce a point, a handheld router can take a bit and move inside the material. Woodworkers usually compliment Dewalt, Makita, and Bosch routers.

Nowadays, most hobbyists and small CNC brands use a handheld router in their CNC instead of a spindle. For example, Shapeoko uses a Makita router or X-carve employs a Dewalt router.

The main difference between a router and a spindle is the electric motor inside them. In a nutshell, spindles have all the technical advantages over routers while routers bring the advantage of simplicity and cheaper prices.

But routers are cheaper, plug and play, safer if you are not an expert, and much lighter so they do not put much pressure on smaller CNCs.

Although rarely mentioned, the most important difference between a spindle and a router is their type of electric motor. All of the other differences between spindles and routers stem from this.

Routers have a universal motor inside. This is the motor you find in most electric appliances around the house from vacuum cleaners to juicers and drills.

This type of motor is suitable for appliances that run a little and then rest, or appliances that are under loads when they start the motor. Also, universal motors can’t carry heavy loads at different speeds, and they have a much shorter life than industrial motors.

On the other hand, a spindle most often has an induction motor (and sometimes a DC brushless motor). These motors are widely used in industry. Some induction motors run for months or years without a second of rest.

We will be talking about routers vs spindles, but what we really mean is universal motors vs induction motors.

Spindles are far better than routers in this area.

The faster a router turns, the less torque it has – until at a certain point it has no torque at all. A router is like a car with a manual transmission (or any transmission except CVT) – they are strongest in their first gear.

As a result, when you increase the load on a router (like when your CNC plunges the tool deeper or tries a higher feed rate) the router responds by lowering speed just like a car going uphill that changes down its gear.

This is also exactly how drills behave. Anytime your router starts cutting, its speed decreases.

However, spindles don’t lower speeds under increased loads (at least not under normal conditions). So, spindles can give you almost the same high torque on a very wide range of speeds.

While there is a more technical explanation for this, the main takeaway to note is that spindles have a huge advantage over routers in generating torque.

Router vs Spindle: Power and Speed

But a 2KW router has that much power only at one certain speed, and the further it is from that speed, the less power it has.

So, a router only tells you its maximum power which it can give at one speed. Therefore, spindles have a tremendous advantage in generating power at different speeds.

Speed control of spindles and routers are mainly different due to their different type of electric motors. But more importantly, routers do not come with a speed control device.

Spindles have automatic speed control. The CAM software and the control software can control the spindle’s speed (RPM).

The software sends the appropriate spindle speed (RPM) to the CNC controller which sends it to the spindle drive. Then, the spindle turns with the intended speed even under heavy loads.

But because a handheld router is intended for woodworking and maneuvering by hand, routers are not equipped with a speed control system.

This affects feeds and speeds greatly. There is a correct range of spindle speed (RPM) for every operation. Unlike a spindle, you can’t control this speed automatically.

Routers usually have a dial that you can turn to change their speed. Most often they have 6 levels of speed you can tap from approximately 6000 RPM to 24000 RPM.

I say approximately because that is the speed the router turns under no load. But as we mentioned, the router’s speed decreases under load.

So, here are the key differences in speed control between routers and spindles.

Drivers for Spindles vs Routers

Routers are easier to work with. You just plug them in your ordinary electric socket and turn them on.

But you need to buy a driver (VFD) for your spindle and wire and install it correctly. This makes spindles more complicated. Especially because the wiring and installation of a VFD take expertise.

While a router is just plug-and-play, a spindle needs a VFD. The main job of a VFD is to control the speed of a spindle.

Plus, spindles run on 3-phase electricity and VFDs give spindles the 3-phase output. But can you plug a VFD in an ordinary electric socket?

Some VFDs need a 3 phase input while some VFDs can take the ordinary single-phase input and turn it into three-phase electricity.

So, if you want to buy a VFD and plug it into an ordinary (single-phase) socket, you need one with a single-phase input.

In a nutshell, routers are plug-and-play while a spindle requires drivers and expert installation.

How Long Can Spindles and Routers Work Without Rest

Spindles can run for hours taking heavy loads but routers are designed for short uses.

Spindle vs Router: Weight and Price

Routers employ the cheapest electric motor because, at the same weight, this type of motor gives the most torque among all of the electric motors (though at low speeds).

So, this type of motor excels at bringing a nice amount of power for lightweight applications and this is the reason for its widespread use in appliances around us.

In short, routers are lighter and cheaper than spindles.

The life expectancy of a spindle (under normal conditions) is between 13 times to 65 times the life of a router.

That is because the average life of a router (universal motor) is between 2000 to 10000 hours.

But the average life of a spindle (3-phase induction motor) is 15 years under normal conditions.

Spindle vs Router: Runout and Accuracy

Runout indicates how far the axis of your spindle or router is turning from the ideal axis. It should be as small as possible because with too large of a runout, the tool life decreases and it breaks more easily.

Plus, when runout increases, accuracy and tolerances decrease.

The effect of runout is negligible in woodworking or cutting similar soft materials because the bending in these materials allows for larger tolerances.

As a result, although spindles are more accurate than routers with smaller runouts (in the 0.001mm range) routers are accurate enough for wood, MDF, foam, and plastic.

Maintenance of Routers vs Spindles

Routers have a brush and you need to change their brush every once in a while.

But because the spindle lasts for a long time, other parts like bearings deteriorate and will need repairing several times during a spindle’s life.

The motor of a router is very loud while spindles turn on quietly. The loud noise of the router is because it has a brushed-type motor. In these motors, there is a brush pressing against the rotor (turning part). So, as the motor turns, it rubs against the brush.

This rubbing creates the loud noise of the router (and is the reason for the shorter life of these motors).

But take note that the act of cutting produces a very loud noise whether you use a spindle or a router.

Some spindles have an automatic tool changer (ATC), so they can select and change the bit automatically. These spindles cost several thousand dollars though. Plus, they also need compression instruments for their tool system.

Advantage of Routers Over Spindles

When To Use a Router Instead of a Spindle For CNC

Although a CNC should have a spindle, a router is a good option for CNC machining wood, MDF, foam, and all plastics. After all, it wouldn’t be a woodworking router if it is not good for cutting wood.

You should also consider the length of your operations. A router is not a good replacement for a spindle if the CNC machine is working hours a day.

Finally, consider the noise level. Routers are loud when turned on.

A spindle is the appropriate cutting motor for a CNC machine, but in less demanding applications, using a router is much more convenient.

Routers do not have even one technical advantage over spindles. Spindles have better torque, more consistent power, accurate and automatic speed control, longer life, less noise, and can run for hours.

So, if you use your CNC to cut wood, MDF, foam, and plastic and do not run your CNC for long hours, a router is a more convenient replacement for a spindle if you don’t mind their excessive noise.

But a spindle is the right choice for more serious CNC applications.

What is the difference between a spindle and a router?

The main difference between a router and a spindle is the type of electric motor inside them.

While routers have a universal motor, spindles usually have an induction motor (or sometimes a DC brushless motor).

So, spindles enjoy a serious industrial motor that can take on heavy loads for hours while routers have a light motor for less serious work.

Is a spindle quieter than a router?

A router is exceedingly loud after turning on while a spindle is quite quiet. However, the act of cutting is loud with either of them. This is the sound from the material and the tool – not the electric motor.

I’m a freelance technical writer for CNCSourced, having been an engineer for a number of years. I have an MS in Control Engineering and have designed and built several automation systems for PLCs. I built my own CNC machine from scratch a few years back, welding metals to make a rigid CNC body, and making CNC control systems for powerful motors. I gained unique experiences both building and working with that DIY CNC machine, and I’ve figured out ways to cheaply cut granite and stone with a unique trick (check my guide for this). If you have any questions, you can reach me at [email protected]