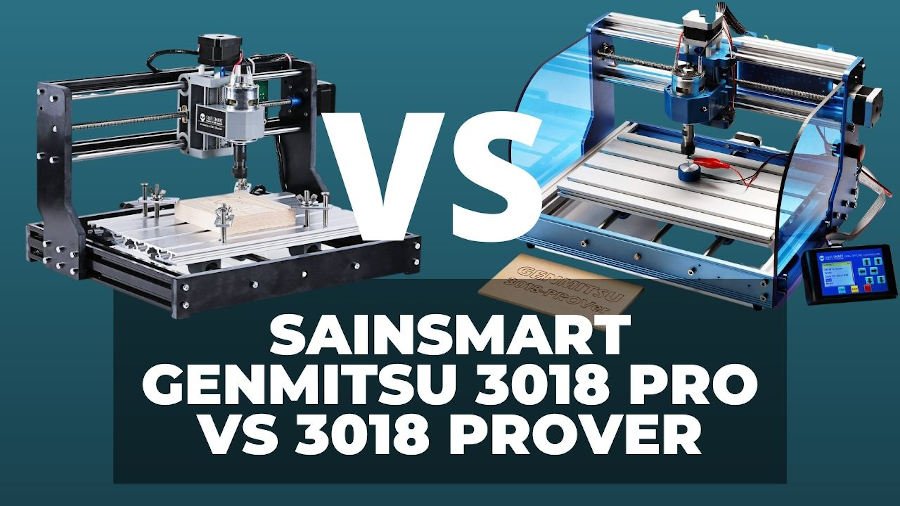 Two of the world’s most popular low-cost CNC routers share similar names and specs, but not such comparable prices. These are the Sainsmart Genmitsu’s 3018 Pro and 3018-PROVer CNC routers, which appear almost identical on paper.

Because it can get confusing, we’re going to look today at the key differences between the two machines, and which you should go for depending on the kind of machine you have in mind.

A trusted name in desktop CNC routers, Sainsmart’s 3018 models are both capable and affordable machines that any hobbyist – particularly those of you with limited workspace – would be happy to own. The name 3018 refers to their 30 x 18cm build size, so if that’s your biggest dealmaker, then fear not when purchasing either the Pro or ProVer models as both are exactly the same in this aspect.

If, however, you need more than build size to go on, then you’ll want to read on to see the key differences between the two machines, and why the ProVer may just be worth the extra $100.

Many CNC routers cost $5,000 – $10,000 for a middle-end machine which can take up to 5 x 10’. Understandably, many households can’t afford the hefty demands on their wallet and homes.

The 3018-Pro and ProVer are desktop CNC routers designed to be accessible to just about anyone who wants to get a start in CNC machining, but doesn’t have the money or space to commit to a standard-sized router.

So when Sainsmart stepped up to the plate in 2018 with the 3018-Pro, an affordable and desktop-sized CNC router, it raised quite a few eyebrows. But when the 3018-ProVer was released two years later in 2020, many people understandably wondered why they should pay so much extra for what appeared to be a functionally identical machine.

Think of the 3018 Pro and 3018-PROVer as the Creality Ender 3 and Ender 5 of the CNC game. If you’re familiar with 3D printers, the Ender 3 is the best and most popular low-cost 3D printer around, with the Ender 5 its big brother. The same goes here with the Sainsmart CNC routers.

Any machine can look as sleek and be as safe as it wants, but if it can’t handle the tasks required of it then all you’ve got is an expensive paperweight.

In terms of use, the 3018-Pro is a perfectly good machine. It’s clean, easy to use, and is heavily upgradable if you feel it’s not living up to expectations. These upgrades include dust collectors, side guards (to match the 3018-ProVer), as well as LEDs for guidance among others.

One of the most exciting add-ons is the laser engraver, for which you can find a guide here.

The 3018-ProVer carries the same 775 spindle motor as the 3018-Pro, but it includes improved stepper drivers to make the machine run a lot quieter and smoother than its predecessor. This makes the ProVer ideal for those who need or prefer a quieter workspace.

Both machines are capable of cutting and engraving a variety of materials like acrylic, wood, and softer metals like aluminum. This means that they are quite similar in the kinds of projects they can undertake. The key differences are found in their performance capabilities as a whole.

As far as raw power goes, the ProVer’s drivers do make it slightly more capable than the Pro, as it can spin at a consistent 10,000 RPM. While the 3018-Pro is capable of these speeds, it averages out at around 9,000 RPM.

If you’re looking for a CNC machine, then you probably don’t mind working with your hands a little, so the fact that the 3018-Pro comes as a kit and needs to be manually assembled. The size of the 3018-Pro as well as its relative simplicity mean that it shouldn’t take more than an hour or two even if you’re inexperienced.

If assembly is an issue for you, however, then you’ll find the mostly pre-assembled 3018-ProVer to be the better choice. While not quite ready out of the box, it should take under 30 minutes to get up and running.

The 3018-ProVer is, in many senses, an upgrade to the 3018-Pro, a lot of which involves its general build. The new design isn’t only slicker, but stronger and safer too.

It’s made mostly from aluminum and features rubber feet to prevent unwanted movement while in use, whereas the mostly plastic frame of the 3018-Pro is a little more brittle with constant use. The sturdy build will help reduce unwanted cuts, and the addition of the acrylic side shields mean less dust and debris will go flying all over your workspace.

While the stability of both the 3018-Pro and 3018-ProVer frames are comparable, the ProVer has a slight advantage largely due to its shape and structure.

While neither the 3018-Pro nor ProVer are dangerous machines if used correctly, you can never be too careful when it comes to tech.

The 3018-ProVer wins out when it comes to safety. It automatically halts a project if a fault is detected, and comes with an emergency stop function if you notice something going wrong.

Both models come with offline controls, which you can use to monitor the machines while in production even if not tethered to a stable Wi-Fi connection. This allows you to keep watch on your projects to ensure everything runs smoothly and gives you the chance to intervene if something goes wrong.

This is especially useful for longer or more complicated cuts, which have a higher chance of failing compared to simpler projects.

If this offline controller is what you’re looking for, then you’ll definitely want to go for the 3018-ProVer, as its controller has a larger display and is much easier to use than the more basic 3018-Pro version.

It’s easy to see how the 3018-ProVer has a much sleeker look than the Pro. While this doesn’t necessarily denote quality, you can’t deny it looks a lot cleaner than its predecessor, which has more of a DIY feel to its look.

The acrylic panels and aluminum finish definitely make the 3018-ProVer a better-looking machine as well as a more practical one.

Beginner or veteran, confident or cautious, you’re going to want a machine that provides as smooth an experience as possible. Either machine works well for small and basic CNC projects, and neither is the clear winner here.

Assembly differences aside, the machines both function identically as both CNC routers for beginners that experienced users will still find very useful.

They also both function well as learning tools. Due to their size, safety features, and easy usability, each model is suited well to educate total beginners or children in the basics of programming, design, and CNC machining.

It could be argued that the ProVer is a better choice for user- and beginner-friendliness as well as a teaching tool, if only for its improved display on its offline controller.

Sainsmart Genmitsu CNC 3018-Pro vs 3018-ProVer: Which One Should You Choose?

There is no single reason why the ProVer is worth the steeper price, but more a combination of reasons like its improved UI, user-friendliness, safety features, and improved offline remote.

The 3018-ProVer is not a brand new machine, and should be viewed as an upgrade to the 3018-Pro, similar to how Nintendo release ‘Pro’ versions of their handheld devices, the capabilities are largely the same with just a few quality of life upgrades.

If you already own a 3018-Pro, then you’ll have no real need to splurge on a ProVer model, as many of the upgrades you can buy or make for the Pro can give you all the features that the ProVer boasts.

Vacuums help with noise, and side shields and dust collectors help with mess. This essentially means you can make something very close to a 3018-ProVer with your Pro model if you’re willing to put in the work.

In essence, if you’re looking for a beginner- and user-friendly desktop CNC router with all the trimmings and don’t mind a little extra expense, then the 3018-ProVer is for you.

If you’re on more of a budget, only need the most basic of machines, or don’t mind something of a project to modify yourself, then the 3018-Pro is absolutely the machine for you.

I'm Scott, a professional writer currently living in Edinburgh. As a kid, my dad taught me a lot about woodworking and cutting plastics. As I grew, so did my interest in what I'd later learn was called 'subtractive manufacturing,' which I'm lucky enough to write about extensively along with 3D printing. CNC machining is a relatively recent passion of mine, and one I enjoy learning about every day