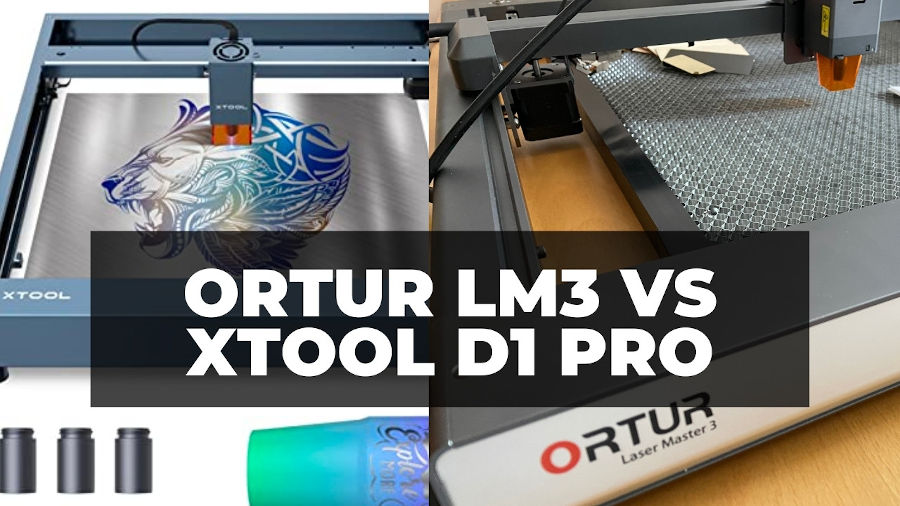 A year ago, the Ortur Laser Master 2 Pro reigned supreme as the best budget laser engraver around. Then Makeblock released the xTool D1 Pro, a 10W laser (vs the 5.5W laser on the LM2 Pro) boasting a better build quality, double the power, slightly larger work area, and more.

To counter, Ortur have recently released the Laser Master 3, equaling the xTool D1’s 10W power, as well as beefing up the metal frame, while overhauling the safety features and connectivity options.

Overall for us, the xTool’s better build quality, slightly larger work area, and tailored accessory range make it a better deal for us, but the Ortur boasts great safety features, is naturally compatible with LaserGRBL, and the Laser Explorer app for operating the laser on your phone is a great experience (the xTool also has an app, though).

Here are the Ortur Laser Master 3 vs xTool D1 Pro quickly compared over each area:

CNCSourced is reader-supported. When you buy through links on our site, we may earn an affiliate commission. Learn more

Both the Ortur Laser Master 3 and the xTool D1 10W offer 10W laser power. They use the same dual laser systems with two 5W lasers combining to create a total of 10W power output, in the same way that Snapmaker’s 10W high-power laser add-on does.

xTool also claim their 10W laser is as powerful as a standard 15W laser, but that’s a separate statement.

We’ve tested the Laser Master 3 and it confidently chews through 5mm acrylic and 3mm basswood sheets, while the xTool D1 Pro can do the same (xTool say they are able to cut through 6mm basswood in one pass).

Depending on your needs xTool also offer 5W and 20W options. The 5W option is best for just engraving materials like leather, metal wood and some ceramics, whereas the 20W version can cut 6mm+ sheets of basswood in a single pass, as well as 5mm acrylic sheets – ideal for small business ventures.

Other variations available include:

Both can mark metals with coatings, like stainless steel and anodized aluminum. However, keep in mind that diode lasers are far from ideal for metal engraving, and if you’re seriously looking to etch metal, you’ll need to spend more on a fiber laser engraver.

Both the Ortur Laser Master 3 and xTool D1 are easy to build, taking around 30-45 minutes to assemble, even if you don’t have much DIY or laser experience. Gone are the days when you’d have to source custom parts for yourself to build a scrapheap-chic machine.

There’s a few finicky parts, for example the threading of one of the wires through the chassis piece to connect to the other side when we built the Ortur Laser Master 3, and you’ll benefit from a second person to steady the frame as you screw a few bolts in, but it’s doable alone in safely under an hour for both.

The xTool overall feels like a better quality build. The sturdy steel structure and frame are taller and wider, and features high-qualtiy steel wheels and rods for a smoother and precise laser movement.

Another factor is that the xTool frame protects the belts within the frame, just in case anything were to come into contact with the belts while laser engraving a project. The Ortur LM3 belts are exposed underneath the side chassis frame – though they are still well out of the way.

The Ortur Laser Master 3 is still well-built – and is one of the best-quality builds of any diode laser around. We’re just picking into the slight differences between the two to make our recommendation.

The xTool D1 Pro has a slightly larger work area than the Ortur Laser Master 3.

In addition, the xTool D1 has an optional extension kit accessory you can purchase for an extra $159.99 that increases working area to an incredible 936 x 432 mm. It’s still in pre-order at the time of writing but click this link to see if it has since released.

Both Ortur and xTool lasers run at speeds where they can still create high-quality engravings. Some worse-quality lasers say they can run at high speeds, but the real quality is poor due to a lower-powered laser. So, when you see 10000mm/min or 20000mm/min, you can be confident that you can create high-quality contrasting portrait images and other engravings at that speed. Naturally, though, cutting requires slower speeds.

Both the Ortur Laser Master 3 and xTool D1 Pro have 0.01mm motion precision – meaning they can create very intricate details on even the smallest elements of your engraving design.

For example, when we engraved our logo as a test on the Ortur LM3, you can see how small the letters on our tagline are – yet the Laser Master 3 tackled them with no issue. And, depending on whether you prefer the Ortur or the xTool, you get the same 0.01mm precision.

The xTool managed to engrave this very precise design on a coaster during our first few tests:

Where both laser engraving machines shine is in how versatile they are: they’re the most connectable lasers I’ve ever used.

For starters, most cheap laser engravers don’t have WiFi. Both these have it, adn you can print wirelessly from an app, as well as via SD card or USB.

You can connect to the xTool via:

You can connect to the Ortur via:

Both machines are also compatible with MacOs or Windows, as well as smartphones via the app.

Both the Ortur and xTool lasers have a very similar mechanism for calibrating the laser head. There’s a pull-down mechanism on the laser head that extends directly underneath your laser, slightly longer than the orange laser protector that prevents light from damaging your eyes.

Simply adjust it so that the calibration mechanism is just touching the surface you want to cut or engrave, and you’re ready to go!

This is far easier than some previous lasers, for example, the Ortur Laser Master 2 had a metal cylinder part that you placed underneath the laser head.

It wasn’t as stable, and if you lost it your calibration setup was ruined – much easier to do when the calibration part isn’t part of the laser head itself, like with the LM3 and xTool D1.

The Ortur has a wide range of safety features, and we’re really impressed with the Laser Master 3’s focus on safety.

The xTool D1 Pro boasts two main safety features: gyroscope detection, which is basically the same as Ortur’s sloping position protection in turning off if the laser is moved while working, and flame detection, which emergency stops if it detects flames or excessive heat.

Ortur do a great job of selling the Laser Master 3 as a safety-first machine, and we are impressed with their focus in this area. The laser ships with glasses to cover and protect your eyes too (so does the xTool) and both lasers have protective orange covers to filter out some of the harmful laser light.

There’s no better or worse for software out of these two lasers – it’s purely down to personal preference. The Ortur Laser Master 3 is compatible with Windows via LaserGRBL or LightBurn, or if you’re on a Mac you’re restricted to just LightBurn. We used LightBurn on a Windows laptop and it connected instantly, but on Mac you may have to add the machine’s profile yourself.

xTool have developed their own in-house laser software, XCS, or xTool Creative Space. It’s surprisingly user-friendly, with easily adjustable settings for speed and power, as well as making it really easy to create your own custom shapes for cutting or engraving.

We enjoyed using Snapmaker Luban when reviewing the Snapmaker 2.0 A350, but xTool’s software is arguably better – though we haven’t used XCS for rotary 4-axis engraving, which Snapmaker Luban is fantastic for.

If you’re used to using LightBurn however, you can still do that. You’ll just need to follow these instructions.

Both lasers also have a mobile app. We’ve spent a fair amount of time with Ortur’s Laser Explorer and it’s a well-built and intuitive app. It comes with a range of free-to-use designs and icons that you can easily resize and send wirelessly to your laser, and it’s compatible with all Ortur and Aufero lasers.

You can also send images for engraving, and it uses cleverly coded AI tools to ensure perfect results almost every time. Makeblock counter with the Laser Box app, which performs similar functions.

A major plus to both is that they’re available offline. As great as Glowforge lasers are for small businesses and hobbyists with their easy-to-get-started build and slick design, being restricted to the cloud means you have to be connected to the web at all times.

This restricts where you can use the laser, and if you have an issue with your WiFi, you’re out of luck. Both the Ortur Laser Master 3 vs xTool D1 Pro are good in this regard.

Ortur doesn’t offer a branded custom air assist for the Laser Master 3, but we used a standard air pump for $99 from Amazon and it worked well – and it appears to have been designed around Ortur lasers.

Both the xTool D1 Pro and the Ortur Laser Master 3 have specially designed enclosures.

Ortur go down the more premium route, with a sturdier metal enclosure that costs $329.

Both Ortur and xTool offer a surface to protect your workbench or station from being damaged by the laser.

Ortur sell a laser engraving platform designed especially for their lasers (and Aufero lasers), which costs $159 (currently on sale for $129).

xTool instead sell a honeycomb panel kit, which performs the same function – preventing your laser from damaging your table. It costs $159 (currently on sale for $139).

Both work well, but we actually use a non-branded aluminum honeycomb table available on Amazon for $129 which also works well if you’re looking for an alternative.

Both lasers are compatible with rotary accessory options for engraving curved objects like beakers, bottles, glasses and mugs – but each has executed differently.

Ortur go down the budget route, with a $99 YRR rotary roller kit that takes around an hour to assemble, and it’s more complex to use. You need to unscrew and re-screw a few parts depending on how wide your engraved object is so that it fits on the two rollers, so there’s more manual work involved. Still, for $99 it’s the best value rotary upgrade around.

xTool go down the more premium route, with a $299 RA2 roller chuck design that can adjust to hold rings, glasses, mugs, and more for engraving. It’s a more premium and better built kit, and best for precise and professional results – but it costs $200 more than Ortur’s YRR roller kit.

Both the xTool D1 Pro and Ortur Laser Master 3 cost around $699 currently. However, both say they are usually more expensive, at around the $849 mark, so watch out for any early launch sales ending and pick one up before then if you can.

You can buy your preferred laser at the following stores online:

So, Should You Buy the Ortur Laser Master 3 or xTool D1 Pro?

Overall, if we had to pick we would choose the xTool D1 Pro, for the slightly faster speed, lightly larger work area, and better quality parts and frame.

But, these are the two best diode lasers under $1000 in our opinion, so whichever choice you make, you’ll be more than happy with.