We’re big fans of Two Trees at CNCSourced. Having been blown away by the Two Trees TS3 in our review last month, we figured it made sense to check out their entry-level offering – the TTS.

I tested the TTS-55. It’s only $80 more expensive for twice the power, and I wanted to see just how much you can get done with a sub $300 laser engraver. This is the same power as the Ortur Laser Master 2 Pro, which costs $100 more – and which we found excellent when we tested it – so we were intrigued by the TTS-55.

And I was not disappointed. The power and precision of this hardware more than meets what you’d expect for a budget-friendly engraver, with excellent build quality to boot.

TTS-55 Laser Engraver at a Glance

An affordable, pro-quality cutter and engraver- powerful and precise for under $300

Easy to assemble – from box to burn in around an hour

No enclosure – best used in a well-ventilated room or outdoors, or with an air assist

According to TwoTrees, the TTS-55 comes 60% set up right out of the box. The only parts that weren’t preassembled were the sections that would be too bulky to ship otherwise.

It probably took me 60 – 70 minutes to get everything up and running.

And this was after I rather stupidly installed a quarter of the frame the wrong way round. It was my bad, and that detour and reassembly probably cost me 20 minutes. If I had to assemble the TTS-55 again, I’d guess it would take about 40 minutes.

As far as laser engravers go, it was pretty straightforward and accessible. The instructions were generally clear and easy to follow, notwithstanding a couple of amusing translations.

The manual also came with a QR code that takes you to an unboxing and installation video. I only discovered this after I built the TTS-55. I just sort of dove in and built it, but I’d recommend using the video if you find builds to be a little stressful.

Put it this way – if you’ve got any background with laser engravers, you will find this build and installation pretty painless. It’s just a case of bolting the main frame together, installing the tensioner and motors, and connecting up a few wires.

Once it’s put together, the TTS-55 weighs 4kg, and just about falls into “desktop-sized” territory with a 300 x 300 mm working area.

It feels like it was made with some kind of aluminum alloy: light and easy to maneuver, but zero concerns about the strength of the frame.  It’s certainly a portable product that you could transport easily as a one-man band.

For people who require a larger working space, Two Trees also offer an expansion pack for an extra 80 bucks.

It lets you extend the frame sides by 100 and 120 mm respectively, representing an 87% increase in the overall work area.

Many consider the Ortur Laser Master range as the gold standard in low-cost desktop open-air laser engraving, with it’s 400 x 400 mm work area. While the default TTS-55 is less than that, you can match and exceed this work area with the extension kit. So, if size matters to you, for $80 you can laser bigger signs and other fun projects. 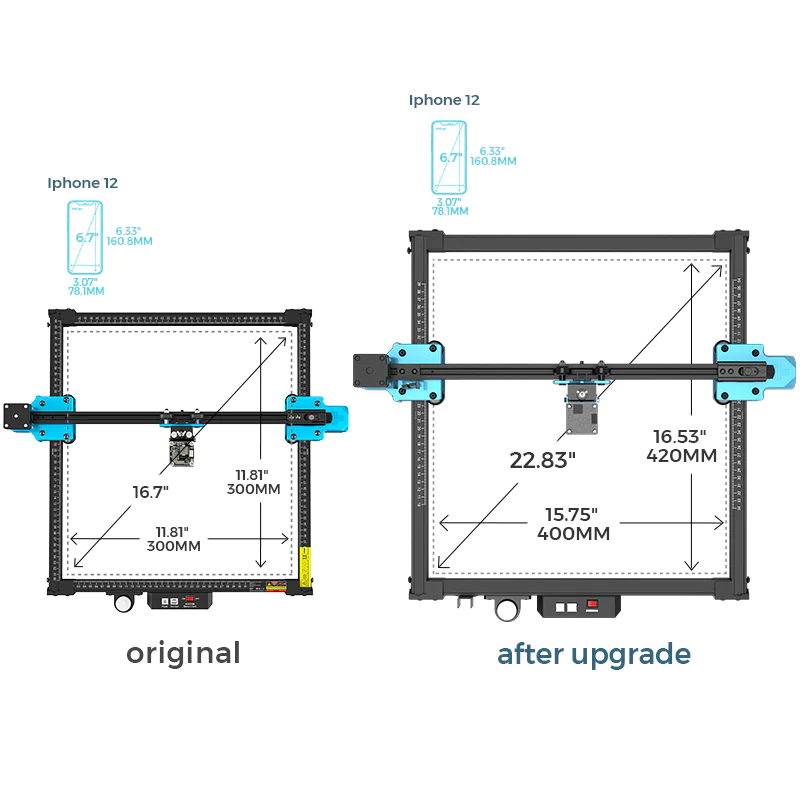 Setting the focus is usually one of the trickier aspects of using a laser engraver, but it was quite straightforward with the TTS-55.

It’s easy to find focus with the convenient adjustment wheel – just twist until you’re aligned with the metal positioning column. I was able to make changes quickly and to a high degree of accuracy without any difficulty.

And if you find yourself struggling – remember the QR code guides I mentioned? They’ve got a great explainer for optimizing the laser spot in there.

I’ll hold my hands up and say “I’m a Pokemon fan”, and I decided that my first laser engraving test on the Two Trees TTS-55 would be one of my favorite monsters: Polywhirl.

Poliwhirl is a particularly good avatar to get a sense of an engraver’s precision. The exterior shapes and shading are gradual and straightforward, while the inner spiral has enough detail to put the TTS-55 through its paces.

I decided I’d use the TTS-55 outside. It doesn’t have an enclosure or built-in ventilation, and once the laser got going I was glad I’d made that choice. There was a noticeable smell – not actively unpleasant, but not particularly nice either.

It took a couple of false starts to find the right power setting. I was a little overzealous, launching the command with the stock LaserGRBL settings and burning too deep into the wood.

Such was the laser’s power that I made holes deep enough to see through:

After a couple of progressively low-powered reruns, I found a sweet spot at 20% power.

At this slower speed and lower power, the result was a deeper engraving, that on less thick and hard wood, would have been more of a cut than an engraving.

The TTS-55 can generate a spot as small as 0.08mm, which is perfect for intricate detailing.

For budget laser engraver owners, the TTS-55 will feel like a real step up. The laser motion is incredibly smooth, meaning it’s still precise across curves and arcs.

The X and Y motors work together seamlessly, and allow the laser to slide across the work surface like a knife through butter.

The TTS-55 is able to accurately position the laser head quickly, and the result is blisteringly high-speed cuts. My Polywhirl print took around 40 minutes, for example.

It’s incredibly time-efficient without compromising on quality. No warping here.

Overall I was really impressed with the level of detail and consistency of the engraving compared to the source PNG. All of the lines were smooth and clean, even the tricky spiral. Top marks.

I wanted to try something on a mostly shaded background to see how the TTS-55 coped with consistent coloring, and the results were pretty impressive. 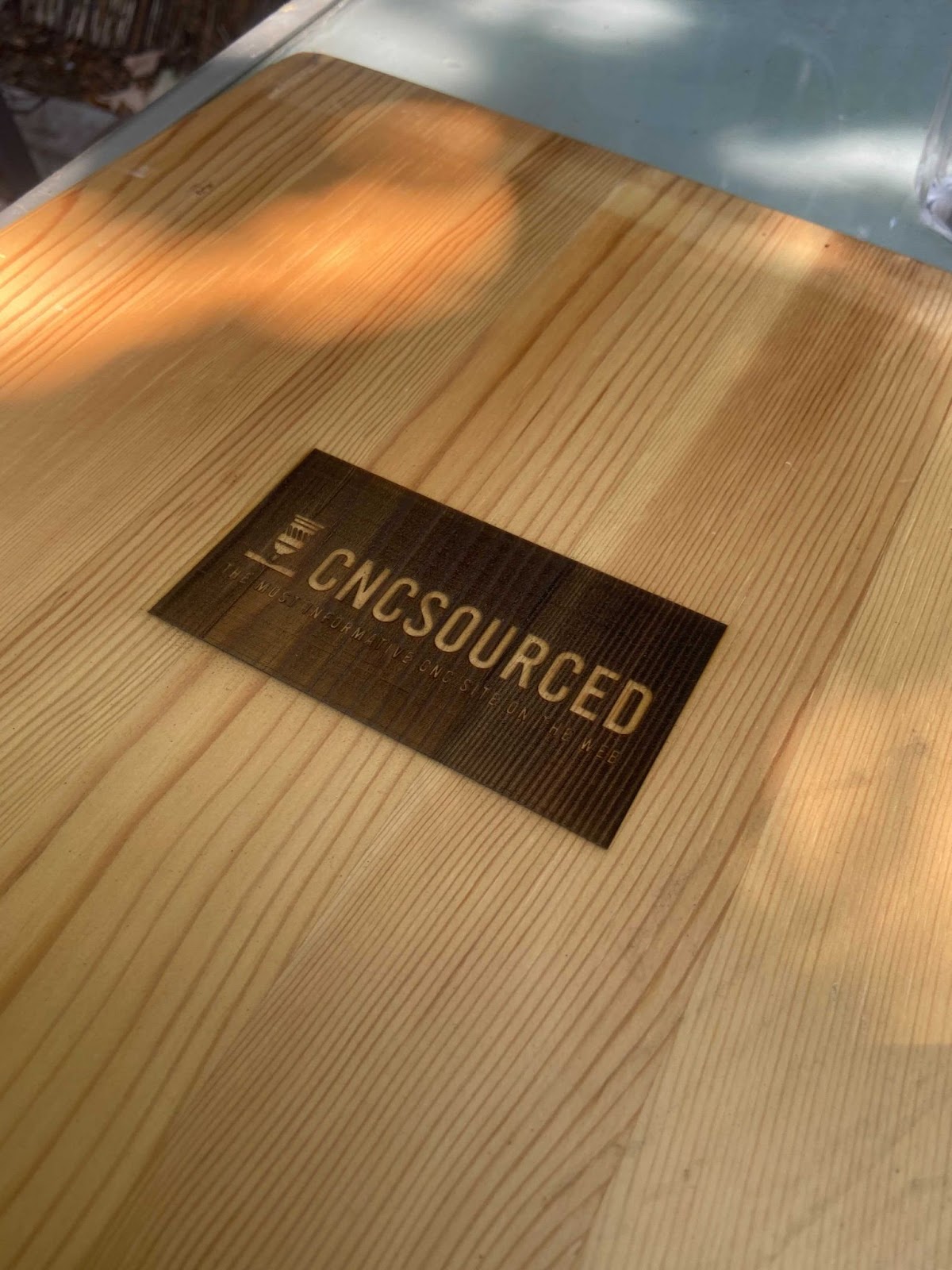 As you can see, the rectangle is straight and uniform, with consistent shading across the shape. The main lettering is cleanly represented against the engraved surface and the texture is really impressive.

The lettering in the smaller byline beneath is incredibly clear given how small it is. There’s zero imperfection or warping, and it’s testament to the precision you can achieve with the TTS-55.

So if you’re looking to engrave and cut signs, coasters, or any other display items for an Etsy store or any other project or enterprise, the TTS-55 was pretty flawless for us.

The detail is made possible by a quadruple lens, which is better at concentrating the laser focal point.

This means the TTS-55 can achieve a higher power density than most other laser engravers in this price bracket. It’s able to concentrate 5.5W of power up to a max temp of 750 – 800 degrees – which is pretty impressive.

That’s plenty of bite to leave an impression across a range of materials.

With the Two Trees TTS-55’s 5.5W diode laser power, you can cut and engrave:

The TTS-55 doesn’t come with an enclosure or cover. The manual recommends it’s used in a “well ventilated or outdoor” area. I’d heard reports of fumes and a pretty distinct smell when in use, and as there’s no built-in air filtration I thought I’d play safe and go outdoors.

The TTS-55 also comes with some rather fetching protective glasses that will help keep your peepers safe. You should wear them at all times – and as there’s only one set included, it’s best to keep your friends and family away while you work.

One of the most exciting features of the TTS-55 for me was Smart Module integration. It’s a bit of a mystery to me how wireless engravers aren’t just standard, but I digress – it’s great to see the feature here.

You can connect to the TTS-55 using their app, Bluetooth, or through a good old-fashioned wired/ SD card connection. The data card and USB come with user guides and software installed on them, so you don’t need to worry if you’re setting up without an internet connection.

The TTS-55 is also compatible with an iPhone/Android app that allows you to print from your device after a one-time setup via PC.

One thing I like about the TTS-55 compared to less intuitive laser engravers is its modular nature. For example, the curved light filter (which protects reflective damage to the laser head) is an easily removable magnetic cap.

It’s also possible to clip in a rotary roller accessory for 360-degree engraving. The module is adjustable across a range of widths, and costs $60.

For the vast majority of use cases, I’d recommend using one of the two main laser engraving software options – LightBurn or LaserGRBL.

Both are straightforward to use and roughly as functional as each other. The major difference is that LaserGRBL does not run on MacOS, and that LightBurn requires a paid subscription after a 30 day trial period.

I chose to use LaserGRBL for this test because it’s the platform I’m most familiar with, but either will work just fine.

If you’re looking for a budget laser engraver that can accomplish professional-grade projects, you’ve found it.

Sure, there are cheaper lasers out there. And yes, there are technically better engravers on the market – the brand-new Ortur Laser Master 3 has more power at 10W (but it’s $600-700). But the TTS-55, for us, offers a great mix of quality and budget-friendlienss. It’s a great starter laser for trialing a new Etsy business proposal, or making fun projects for around the house. The quality you get per dollar is pretty staggering.

It’s a steal for a beginner engraver that will produce great results right out of the box.

It’s not the sort of product you’ll feel like you have to replace after six months as your burns become more complex.

The TTS-55 will be able to handle pretty much anything a hobbyist throws at it, and I’m happy to recommend it to you guys!